Personal networks (PN) is a novel concept that automatically and continuously ties together, in a secure way, a person’s devices regardless of where they are on earth, as long as they can be connected to each other, directly or via infrastructure networks. This can include devices in the car, office, or any other place. However, a PN is more than connectivity; it supports the person’s applications and takes into account context, location and, of course, the communication possibilities. A PN is self-configuring and able to incorporate many different types of networks and devices. The figure below illustrates this. It shows how a user has electronic devices around her that can communicate with each other using short range wireless technologies. It also shows how those devices can communicate with the devices of friends in the close vicinity as well as devices in smart buildings. The PN also incorporates devices elsewhere, such as in the office and at home. 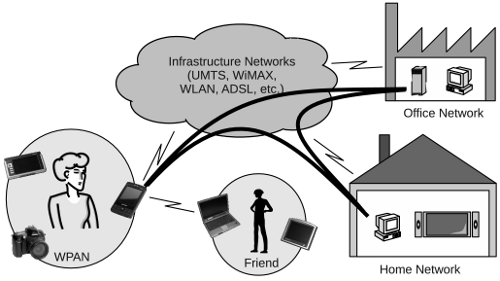 A PN consists of pieces of software that can be downloaded and installed on a person’s devices. Ideally, the software would already be installed on the devices when delivered to the user. The software uses the device’s communication capabilities to establish a PN consisting of the person’s other devices that also have PN software running on them. In its most basic form, the PN software provides easy networking, security, and service discovery so that applications and services on the devices can cooperate and communicate with each other on behalf of the user.

In short, PNs provide connectivity among all a person’s electronic devices while being self-managing, secure, adapting to changing environments, including handling of mobile devices, supporting current and future wireless technologies and applications.

A core concept of a PN is the distinction between Personal and Foreign Nodes. This distinction is  based on the pairing of Personal Nodes. 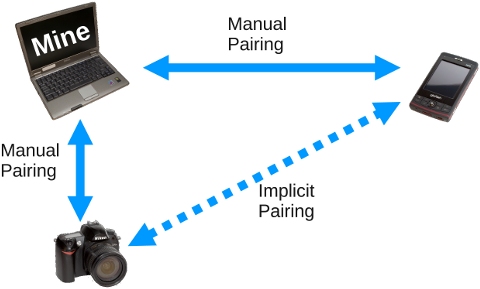 Let us describe this pairing process. On one of devices that the user has, he/she creates a new PN. At the same time, that device becomes a Personal Node. The PN is given a name and perhaps a unique PN identifier to distinguish it from other PNs. Other preferences can be configured at this time. The next step is to pair other devices that the user possesses with this initial device.

In the pairing process, the device to be personalized establishes a secure connection using a shared network (e.g., WiFi, Ethernet, Bluetooth, etc.) to an already personalized Node. Using this connection, they exchange security keys. These keys are later on used to securely detect each other and to establish secure connections also in the future.

Active personal nodes that have the possibility to communicate with each other without external assistance are grouped into clusters. Typical PNs will consist of a few disjoint clusters located in areas where the person has his devices, such as one at home, one in the car, and one around him.

The figure above shows a scenario where some active nodes are scattered in an area. Some of the nodes are personal nodes (marked with green) as can be seen in the left part of the figure. The thin lines denote possible communication links. The personal nodes will detect (based on hello packets) when there is another personal node in the vicinity that it can directly communicate with. If so, it establishes a secure connection over the link, which are denoted as thick green lines in the right side of the figure. Using these secured links, clusters (connected subnetworks) of active personal nodes are formed.

A user is likely to have several active clusters, such as for instance: a home cluster, an office cluster, a car cluster, etc. These clusters are connected with each other using secure VPN-like tunnels over the Internet. The difference is that these tunnels are dynamically updated based on the mobility of the clusters and/or the devices. In this way, mobility can be handled for the applications and services.

On top of the PN networking, we find applications, services, and clients running on the nodes. To further improve the usability of a PN, a service discovery and management framework is defined that can support the applications and enable auto-configuration and adaptation.